JOSEPH CAWTHORNE, familiarly known as John the Pieman, was a well-known figure in the streets of Sunderland thirty or forty years ago. John’s “pies all hot” were made of good materials, and he used to cry them in a fashion peculiarly his own. When any young customers came, they were required to put pennies down on the tin-lid, and ask: “Heads or tails?” If “John” guessed right, he whipped up the pennies and gave them no pies; but if he guessed wrong, they got their pennies back, and pies each into the bargain. “Toss or buy, gentlemen,” he said on such occasions; “I am the only man in Sunderland who fought at Waterloo.” And this boast was commonly taken to be well founded, as it was sustained by the medals he displayed on his breast when in holiday costume. These seemed to bear out that “John” was one of the few surviving heroes of the Peninsular War, and of the great battle on the plains of Waterloo. According to his own account, Joseph Cawthorne was born on the anniversary of the Decollation of St. John the Baptist, the 29th of August, 1790, at Newark-on-Trent. When he was fourteen years of age, he was bound apprentice to a canvas weaver; but he was hardly out of his apprenticeship when he joined the Montgomeryshire Militia, and shortly afterwards volunteered into the first battalion of the Rifle Brigade. After a six weeks’ furlough, he proceeded to Lisbon to join his regiment, marching through Portugal to Spain. He fought at Vittoria, the Pyrenees, and Toulouse, and in nearly every one of the hotly contested engagements in the Peninsula ; and he had the rare good fortune to be only once wounded, and that but slightly. But at Waterloo he was wounded a second time, and that rather more severely. After returning to England, he continued in the service of his country for three or four years more, and then took his discharge. This was about the year 1819. Unfortunately, he got no pension, for what reason we cannot say; neither do we know what chance brought him to Sunderland, where he eventually took up his abode, and managed to make a decent living in the way above indicated. When he had reached his sixty-eighth year and began to feel the infirmities of old age, efforts were made to get him a small pension, and the consequence was that he had sixpence a day allowed him, which was increased in 1863 to ninepence, and in 1866 to a shilling a day. The old pieman died in 1869, in his seventy-ninth year. 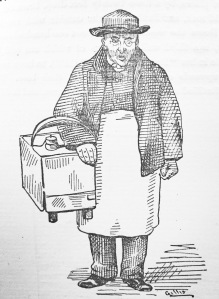