The following article was written in January 1889 in the third volume of the Monthly Chronicle of North Country Lore and Legend.  It is tells the sad tale of the wreck of the Stanley off Tynemouth in 1864. 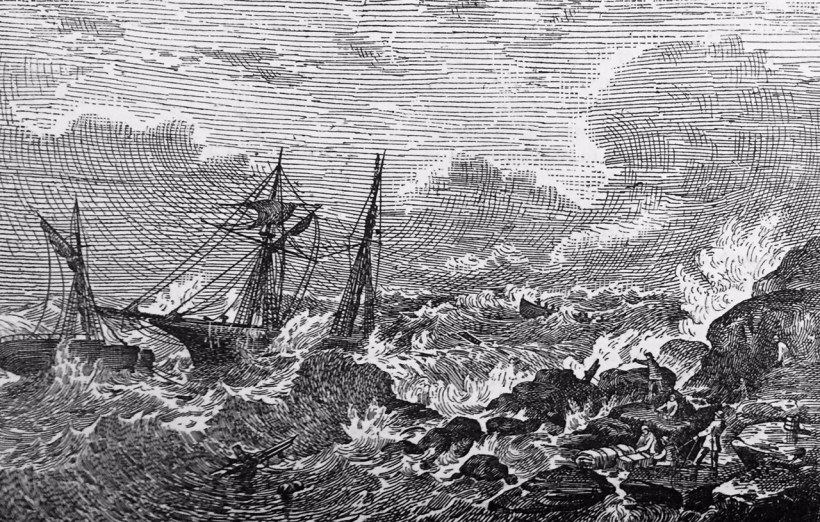 The wreck of the Stanley at the mouth of the Tyne took place on the 24th of November, 1864. During the early part of that day, a strong breeze blew from the east-south-east. It was not, however, sufficiently violent off the mouth of the Tyne to account for the gradual rise of the waves as the day advanced. In the afternoon, the storm, of which the wind from the quarter indicated had been the herald, gradually grew in violence until it became evident that there were serious grounds for apprehension as to the safety of vessels which were then in the offing. About half-past four o’clock an occurrence took place which, unfortunately, proved the precursor of further and more serious disasters. One of the Tyne Commissioners’ hoppers, in tow of a steam-tug belonging to Mr. Lawson, of South Shields, was outside the bar, when the towline parted. The hopper was driven behind the North Pier, the two men who were on board of her being rescued by means of life-buoys by some of the pier men; while the tug was dashed upon the Herd Sands, whence her crew were saved by the South Shields lifeboat. The next vessel which ran on shore proved to be the passenger steamer Stanley.

This fine vessel was the property of the Aberdeen Steam Navigation Company. She was an iron screwsteamer, and was built at West Hartlepool by Messrs. Pile, Spence, and Co. in 1859. Her register tonnage was 376, her actual burthen being 552 tons. She had sailed from Aberdeen on the previous night, bound for London, in charge of Captain Howling, having a crew of 29 hands, all told. The number of passengers at the time of sailing was 30, about half of whom were women. The vessel had also a full cargo on board, and on her deck were about 48 cattle and 30 sheep. She proceeded on her voyage with every prospect of reaching her desired haven in safety, until off the Northumberland coast, where she first began to experience the effects of the storm. Finding the sea so turbulent in-shore, the Stanley stood out seaward in the expectation of finding smoother water, but discovered that she was only running into the full force of the gale. In this terrible plight, the captain determined to steam for the Tyne, the mouth of which was reached about a quarter to five o’clock. The master had only once during his nautical career been in the Tyne, and that was about twenty years previously. Under these circumstances, he naturally felt considerable hesitation in taking the bar, more especially as the tidal lights were not then burning. He fired a couple of rockets for a pilot, but none came off. A tug-steamer did, indeed, leave the harbour, but she never approached near to the Stanley. The mate, however, who had frequently sailed to and from the Tyne, expressed his readiness to steer the vessel into port. The captain yielded to his representations, and the head of the steamer was turned towards the bar. This was safely crossed. But the ship had got no further than just off the Spanish Battery, when, with a dreadful shock, she struck upon the rocks known as the Black Middens.

As soon as the peril of the Stanley was seen from the shore, a number of the coastguardsmen set about getting the rocket apparatus ready for firing. The Tynemouth lifeboat, the Constance, was promptly manned, while the North Shields lifeboats, the Northumberland and Providence, with the South Shields lifeboats, William Wake, Tyne, and Fly, were also got out and pulled down the harbour into the Narrows. Intelligence of the catastrophe spread with lightning-like rapidity, and the consternation and excitement of the inhabitants in the sister towns at the mouth of the Tyne were intense. The night was pitch dark, and from the elevated headland overlooking the harbour the sea could be made out only by a broad band of white foam; but a couple of hundred yards from the shore could be dimly discerned through the gloom some dark object indicating the position of the ill-fated vessel. The roar of the waves, too, was deafening; but in the lulls of the storm the despairing wail of the poor creatures exposed to the pitiless waves was heard with painful and agonizing distinctness. As the tide fell, the rocket apparatus was carried over the rocks, and preparations were made to establish means of communication with those on board.

Before the disaster, the Stanley had been provided with four lifeboats; but, after striking upon the rocks, three of these were speedily smashed to pieces. An attempt was made to launch the remaining lifeboat; and for this purpose four of the crew got into her, taking with them four female passengers. While the boat, however, was being lowered from the davits, a heavy sea caused her to turn round and sink. Three of the seamen were rescued by those on board, but the four ladies and the fourth seaman were, in a moment, swept beyond the reach of aid.

After firing one or two abortive rockets, the coastguard at last succeeded in establishing communication with the Stanley. The line carried by the rocket was soon the means of carrying a stout warp between the vessel and the shore; and upon this warp the cradle was slung. The first man to venture into the cradle was an ordinary seaman, named Andrew Campbell, who was safely conveyed to the shore amid the cheers of the bystanders. A second seaman and a woman next got into the cradle, but, unhappily, they fell or were thrown out, and were drowned. The second mate, James Knipp, then took his place in the cradle, and was safely drawn through the raging waters to the shore. Owing to an unfortunate error of judgment on tho part of some one, the hawser was secured in such a manner that it was no higher than the rail of the ship, the consequence being that those on shore could not get it clear of the water. The result of the mistake was soon painfully palpable. When a seaman named Buchan had been drawn about midway between the vessel and the shore, the bight of the warp was borne by his weight against the rocks, amongst which the whip-line of the cradle became entangled, and the cradle itself was brought to a standstill. Inspired by the strength born of despair, the determined fellow managed to haul himself hand-over-hand to the shore by the warp. The warp and cradle being, by this untoward accident, rendered useless, an end was put for the time being to any further efforts in that direction; and the unfortunate passengers and crew still on board were left to their fate until the full tide of the morning should afford an opportunity for the resumption of measures for their rescue.

The captain and his mate appear to have done everything in their power towards saving the passengers from being swept away. Two women the only two who were afterwards saved were induced to place themselves in the foretop, where they were securely lashed; and three or four more were bound to the shrouds beneath. The bulk of the female passengers, however, were too much affrighted and prostrated by the fearful experiences through which they were passing to venture from the deck.

About half-past nine o’clock, the steamer was struck by a tremendous sea. The hull yielded to the irresistible blow, and parted abaft the mainmast. The force of the waves swung the fore part and larger portion of the vessel completely round until it was left in a position with the bow breasting the waves. At this time the whole of those on board were on the larger portion of the vessel. The second-class cabin was on the deck, and the top of it formed what was known as the bridge or “look-out.” Affording as it did a place of refuge from the breakers which poured incessantly upon the doomed vessel, it became crowded by female passengers and a portion of the crew. All were tightly lashed to the rails by which the sides were guarded. But a terrific breaker swept the entire structure, with its shrieking occupants, into the sea, where they all perished.

The survivors in other parts of the vessel had taken refuge in the fore and main rigging, whence several of them were washed into the sea. The same fate befel two of the women who had been lashed to the shrouds, while another, unable to bear up against the exposure and hardships of that terrible trial, expired from exhaustion.

About five o’clock next morning the sea had sufficiently fallen to permit a resumption of the exertions to save the survivors. Three rockets were fired before a communication with the vessel was established. This time those on board made the warp fast to the mast-head, by which means it was kept out of the angry surf, and the incline materially facilitated the working of the cradle. Soon all was ready for recommencing the work of rescue, and in a few minutes afterwards the whole of the survivors were brought safely to land.

There were lost, in all, about twenty-six lives; and with the other disasters which occurred at the harbour’s mouth during that memorable night, the catalogue of mortality was swollen to between thirty and forty.

There has since been no such lamentable experience in the history of Tyne navigation, the great improvements effected by the enterprise of the River Commissioners having largely contributed to the greater immunity from fatal disaster which is now enjoyed, while the brave members of the Tynemouth Volunteer Life Brigade, which owes its origin to the wreck of the Stanley, are ever ready to render assistance when necessity arises.

The sketch of the wreck which accompanies this article is taken from a painting by Mr. J. W. Swift, a local artist of the time.

One thought on “The Wreck of the Stanley”