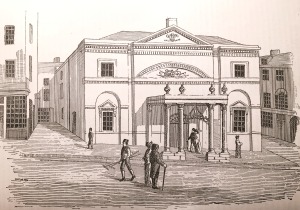 Mosley Street is comparatively modern, having been begun in 1783. It was named after an alderman of that day, and was regarded as a decided improvement. And so it was; but it is to be regretted that, when it was made, some of the monuments and tombstones sold by auction at the restoration of St. Nicholas’ Church the same year, should have been employed in its construction. This contempt for sacred monuments was too common at that time. Alderman Hornby, an antiquary of the period, who lived in Pilgrim Street, preserved in his garden portions of the monuments thus disposed of. Amongst others, Mrs. Carr’s effigy, from George Carr’s monument, was so preserved; it is now in the old Castle. Such disregard for the memory of the dead and the feelings of the living would scarcely be tolerated today; at least, not without an earnest protest. But the work was in itself a street improvement all the same. At the time the Cloth Market ran in a continuous line to the church yard, whilst the Groat Market went as far as its northwest corner; but narrow passages permitted the pedestrian to pass from the one end of the exterior of the church to the other.

Beginning at the Pilgrim Street end of Mosley Street, we note that the building at the southern corner is Messrs. Woods’s Bank, the old establishment of Sir Matthew White Ridley and Co. Mrs. Jameson, when a child, resided with her father, Mr. Brownell Murphy, a miniature painter, above the shop of Richard Ratter in Mosley Street. It was in the premises occupied by Messrs. Mawson and Swan that Mr. Joseph Wilson Swan conducted the experiments in electric lighting that led to the invention of the Swan Lamp. These same premises were gutted by a great fire which occurred on January 17, 1880.

When we arrive at the centre of Mosley Street, we find Dean Street meeting it from the south. The formation of Mosley Street caused the Corporation to take in hand also the improvement of the neighbouring portion of the town. What is now Dean Street was then an awkward and unsavoury dean, or dene, with high and precipitous banks on either side. The Lork, Lort, or Loot Burn — for the name has been spelt in all these ways — ran down it to the Side, where it had been covered over. The authorities saw that they could no longer leave this locality alone. Some three years, therefore, after Mosley Street was constructed, the work of improvement was begun. It was found necessary to remove the old Nether Dean Bridge(the thoroughfare is still called the. Low Bridge), which, it may be remembered, crossed from Pilgrim Street to St. Nicholas’ Churchyard. The bridge was a very ancient structure. The old Roman Wall probably ran along it, passed the north side of the mother church, near the present site of the Turf Hotel, and then onward up Westgate Hill. Bourne, copying Gray, says, “the river ebbed and flowed above this bridge, and the boats came under it with the wares and commodities of the merchants.” Dr. Bruce quotes Mr. Wardle, an architect of Newcastle, as having told him “that in examining, some years ago, a cellar at the corner of the Painter Heugh and Dean Street, he noticed what he took to be the remains of a quay,” that “an iron ring was inserted in the masonry,” and that “the masonry in the vicinity of the ring was marked as if by the action of boat-hooks.” Baillie, in his history, says that boats came as far as the foot of the hill up which Dean Street runs. And this seems the most feasible theory of the three. The statements of Bourne and Gray, at any rate, are rather improbable. Dr. Wolcot — “Peter Pindar” — satirised George III. once for not knowing how in the world the apples got into the dumpling. Similarly, it is not easy too see why the river should not find its level before getting so far up the hill as the Low Bridge.

The North-Eastern Railway crosses Dean Street over a lofty and beautiful arch, from which a fine view of Grey Street might be obtained if the directors of the company could only be induced to lower the parapet.

The circumstance which most of all gives Mosley Street its historical interest is its association with dramatic art. True, the drama was popular in Newcastle long before Mosley Street was thought of. Not to mention the old miracle plays, which were probably performed in the open air on the Sandhill, there were bands of strolling players in Newcastle from the times of the Plantagenets. In modem times dramatic entertainments were given in the Moot Hall, Castle Garth, and in a booth set up in Usher’s Raff Yard, near at hand. Then, in 1748, a third establishment was fitted up in the Turk’s Head Inn, not the present hostelry in Grey Street, but the original house of that name in the Bigg Market, subsequently converted into a chemist’s shop. Amongst others, Munden acted here. But this did not long meet the wants of the day; and accordingly, in 1785, it was resolved by some of the literary men of Newcastle to build another theatre, elegant in plan and commodious in structure. We have already said that Mosley Street had just been formed. It was rightly regarded as an ornament to the town; and here it was settled that the site of the new theatre should be. It was a brick building, with a decorated portico, as seen in the picture, facing down Dean Street. On its west side was Drury Lane, an old passage leading from the Flesh Market, or Cloth Market, to the Lort Burn. Some of the entrances to the theatre were in this narrow by-way, and as it is still standing: and retains its designation, the position of the building may be easily traced. A royal license for the performance of stage plays was obtained in 1787, and on the 2lst of January following the theatre was opened with Arthur Murphy’s comedy, “The Way to Keep Him” and “The Sultan.” The enterprise began well, nor did public favour fail to support it through many succeeding years.

Among the earliest performers in the new theatre was George Frederick Cooke, one of the very ablest actors of his day, though assuredly, also, as erratic as able. Cooke’s Sir Pertinax Macsycophant, Sir Archy Macsarcasm, Iago, Falstaff, and Richard were admitted by his own contemporaries on the boards to be beyond challenge by the best of them. In the Mosley Street theatre, he opened, as the players say, in Othello. “Here,” he says, “I met with most flattering applause, which I continued to receive while I remained attached to the theatre. My own night the first season was ‘Richard the Third,’ in which Miss Duncan, now of Drury Lane Theatre, acted the Duke of York.” Mrs. Siddons and he appeared together in Newcastle in 1789; and in the same year, on the same boards, he first saw and played with Mrs. Jordan, an actress who stood as unrivalled in comedy, particularly in girls of every description, as Mrs. Siddons did in the sublime, the terrible, and the pathetic of tragedy.

Stephen Kemble, who used to play Falstaff without stuffing, became sole manager of this Mosley Street Theatre in 1792, and continued so for fourteen years. He was a remarkable member of a remarkable family; brother of John Kemble – “Black John” and “King John,” Cooke would sometimes call him when in one of hit sarcastic moods, though they were good friends for all that; of Charles Kemble, the finest light comedian of his time; and of Mrs. Siddons, so unapproachable in graver parts that she sat to Sir Joshua Reynolds as the representative of the Tragic Muse. Stephen himself excelled in the old men alike of tragedy and comedy; yet he had a curious fancy for playing Hamlet, even when he weighed eighteen stones. A caricature likeness of him in this part, with the quotation beneath, “Oh, that this too, too solid flesh would melt,” rather checked his ardour in the indulgence of this hobby at last. He wrote several plays, odes, and lyrical pieces; and Brinsley Sheridan pronounced him to be the very best declaimer he had ever heard, on or off the stage. He died in retirement at his seat, the Grove, Durham, where his remains were interred in the Chapel of the Nine Altars, at the east end of the Cathedral, and on the north side of the shrine of St. Cuthbert

The inimitable comedian, Liston, the original Paul Pry, was a member of one of Stephen Kemble’s stock companies in Newcastle. Commencing life as a pedagogue of humble pretensions, a teacher’s assistant in a day school, Liston possessed such rich comic powers as carried him to the very front rank in his profession. “How is it possible,” asks John William Cole in his Life of Charles Kean, “to fancy boys looking seriously for a moment on that magazine of fun which his countenance must ever have exhibited? By some strange infatuation he imagined himself destined to excel in the heroes of tragedy, and was not a little mortified when on benefit nights he played Borneo and Octavius in sober seriousness that the audience insisted on receiving them as burlesque. George IV. encored him from the royal box in Maw-worm’s Sermon (in “The Hypocrite”) which ever afterwards stamped that unbecoming mummery with a singular reputation and a similar call.” Liston died in 1846, aged sixty-nine, in the possession of a handsome fortune.

William Macready succeeded Stephen Kemble in the management, and remained in it for twelve years. His famous son, William Charles, commenced his career as an actor in Mosley Street.

A melancholy incident in connection with the old theatre must be mentioned. On the 19th of February, 1825, “Tom and Jerry” was produced, under Mr. De Camp’s management. Hardly had that play commenced, when a cry of “Fire !” was raised, a flash was seen, and a great quantity of smoke soon after penetrated through the floor of the gallery. Panic ensued; the inevitable ugly rush came; the gallery stairs were blocked up; the check-taker, in attempting to open the barriers, was thrown down the stairs; and when at length the results came to be ascertained, it was found that seven persons had been killed.

In the face of a record such as we have given above, who shall deny that “Newcastle can boast of having been a famous nursery for dramatic genius”? Here, in this one theatre, at various times in its history, Newcastle had Mrs. Siddons, Mrs. Jordan, Miss Duncan, Cooke, the Kembles, Liston, and Macready. Some came as stars; others, who came as strangers and as members of the stock company, the kindly yet discriminating criticism of Newcastle audiences sent away to become stars. A sorry day will it be for the real interests of the drama in Newcastle if that criticism should ever cease to be discriminating as well as generous! It remains only to add that the projects of Richard Grainger caused the Mosley Street Theatre — or Drury Lane, as it was at other times called — to be pulled down; and with its destruction there closed no inglorious chapter in the artistic history of Newcastle.