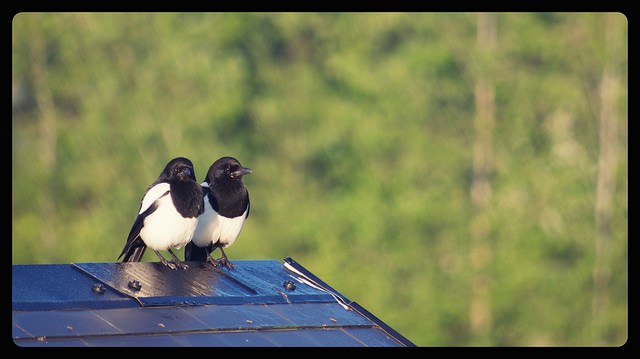 In some parts of Northumberland it is thought lucky if we meet with two magpies, but very unlucky if one crosses our path. The following couplet I have often heard repeated:

One is sorrow, two mirth,

Three is wedding, four a birth,

There are many who still look in the candles for expected letters, and search the tea-cup for coming visitors. If a young lady, in snuffing a candle, snuff it out, she will not be married during the current year. A spider descending upon you from the roof is a token that you will soon have a legacy from a friend. When a spider is found upon our clothes, some money is coming to us. The sudden loss of hair is a prognostication of the loss of children, health, or property. If a person’s hair burn brightly when thrown into the fire, it is a sign of long life; the brighter the flame the longer the life. If it smoulders away, and refuses to burn, it is a sign of approaching death. If the nose itches, it is a sign that you will be crossed or vexed. Itching of the right hand portends receiving money. If the right ear tingles, you are being well spoken of; if the left ear, some one is speaking ill of you.

It is accounted lucky to carry in the pocket a crooked sixpence or one with a hole in it, or to put a stocking on inside out, or a waistcoat similarly, through inadvertence. If you put a button or hook into the wrong hole while dressing in the morning, some misfortune will occur during the day. If you dream that you have lost a tooth, you will shortly hear of the death of a friend. If you dream of a wedding, you will hear of death; if you dream of water, you will hear of sickness. If a toad crosses the path, it will rain. It is lucky to have money in your pocket when you first hear that harbinger of spring, the cuckoo. It is unlucky, after one has started on a journey, to be recalled, and told of something previously forgotten.

Mr. Henderson, from whom I quote for the purposes of this communication, states that a clergyman from Yorkshire told him that his grandfather, though anything but a weak man, would never turn back when he had once started upon an expedition. He had been known to remain on horseback at the end of his grounds, shouting to the house for something that he had forgotten, rather than turn back for it. When rooks desert a rookery, it foretells the downfall of the family on whose property it is. There is a Northumbrian saying that the rooks deserted the rookery at Chipchase (on the banks of North Tyne) when the family of Reed left that place. On the other hand, the Wilkie MS. informs us that when rooks haunt a town, or village, mortality is supposed to await its inhabitants; and if they feed in the street it shows a storm is near at hand. It is said to be a good omen for swallows to take possession of a place, and build their nests around it; while it is unpropitious for them to forsake a place which they have once tenanted. A cock crowing on the threshold is a sign of approaching visitors. For a magpie to be seen near anyone’s doorstep is an omen of death. I was told some time ago by an old but intelligent gentleman, a resident of Winlaton, that when he had seen a magpie on three different occasions fly close to the door of people’s dwellings a death took place shortly after.

When very young, and living in Haydon Bridge, the following was related to me by a friend who has long passed away, and who possessed a fund of local knowledge: About seventy years ago, a quarryman, who resided in the above village, proceeded to work early one morning, accompanied by other fellow-workmen. On walking up Cleatby Bank, opposite West Mill Hills, a magpie crossed and re-crossed their path several times. It then disappeared, but, when nearing East Brokenheugh, it suddenly flew in amongst them, nearly knocking the hat off the quarrymans head. One of the poor fellows was much alarmed, and advised quarryman to return home. “Not I,” said the quarryman; “I don’t believe in such nonsense.” Arriving at the scene of their labour, they commenced work, and had only been working a short time when an alarm was raised, and each shouted to the other to run for his life. On endeavouring to save himself, the quarrymans hat fell off, when he stumbled over it and fell, and before he could rise a large stone came rolling down, crushing him to death.

First footing still largely prevails in various parts of Northumberland. It is considered very unlucky for the first visitor to a house on a New Year’s Day to belong to the gentler sex. In order to obviate this calamity, so soon as the last stroke of twelve has tolled forth from the parish church on the night of the 31st of December of any year, the male members of each household, placing a bottle of wine or spirits in their pockets, sally forth upon visits to the houses of all their friends. Others keep their doors locked until a male commences knocking, when the inmates, on being assured that it is not one of the fair sex, admit him, and partake of bread and cheese, which is often washed down by a small sensation of “mountain dew.” There are some good ladies whom the writer knows very well (and with whom he has often been amused) who will not allow any ashes or slops to be taken out of the house on New Year’s Day, it being unfortunate to take anything out. One can bring in, however, as much as possible.

A more agreeable rendering of the magpie rhyme is current in Wensleydale. Here it is:

One for sorrow, two for luck,

Three for a wedding, four for a death,

Five for silver, six for gold,