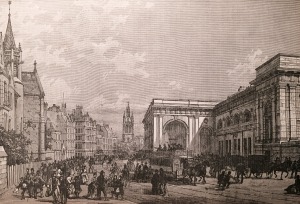 We propose now to set forward towards Scotswood Road from the well known corner where Grainger Street ends by joining Neville Street. For otherwise we should slight our famous Central Railway Station sadly; and that would never do.

It was in the year 1847 that the need of a new and central railway station, commensurate with the growing requirements of the town and neighbourhood, was felt to be imperative. Accordingly, on the 13th of September in that year, building operations were commenced, which continued for nearly three years. At last, August 29th, 1850, Queen Victoria came to Newcastle to open the new station. Her Majesty was received in all form by the corporate authorities, and by a detachment of the 33rd Regiment, then stationed at the barracks. There were also present Earl Grey, as Lord-Lieutenant of Northumberland; Sir Walter Trevelyan as High Sheriff; and many other dignitaries of the district. The Royal party consisted of the Queen, the Prince Consort, the Princess Royal, the Prince of Wales, Prince Alfred, and the Princess Alice. An elegant luncheon was prepared for the visitors; corporate addresses were presented; and there was much firing of cannon and so forth. It need not be added that the streets were thronged. The visit, however, was a very brief one, lasting twenty minutes only, after which Royalty proceeded northward.

As to the station itself, it is of the Romano-Italian style of architecture, with ornamental work of the Doric order. Its principal front is about six hundred feet long, and the station occupies altogether an area of about three acres. It was built by the York, Newcastle, and Berwick, and the Newcastle and Carlisle Companies, jointly, at an original cost of about £90,000. Of course, alterations and repairs, &c., must have since added considerably to that sum. The architect was Mr. John Dobson, whose skill and genius were never better shown than in the beautiful curved roof of the building,

In 1850, on the 30th of June, and, therefore, prior to the formal opening, the station was en file, on the occasion of a banquet given within its precincts to Robert Stephenson. In addition to the conventional adornments of banners, devices, and the like, it was appropriately bedecked with handsome views of the Menai Tubular Bridge, the Berwick Viaduct, and the High Level Bridge, in honour of the celebrated engineer whose name will ever be associated with these great works. The Hon. H. T. Liddell, M.P., was in the chair on this occasion, in graceful recognition of the helpful hand held out to George Stephenson in his early struggles upward; the vice-chairs were occupied by the Mayors of Newcastle and Gateshead (Messrs. Crawhall and Hawks); and about four hundred persons sat down to dinner.

Across the road from the station stood the Railway Arcade public- house (so called from a covered archway of glass which gave communication into Westgate Koad). In 1855 it was kept by one Beardsmore. On the 22nd of December, in that year, about four in the morning, P.C. Ellison, being on duty close at hand, heard cries of “Murder! murder!” in a female voice. They proceeded from the back premises of this public-house. Ellison hastened thither and knocked at the door, which was forthwith opened to him by the landlord. On entering the premises, the policeman found Mrs. Beardsmore lying in the passage, bleeding; and he ascertained that she had sustained some severe wounds on the head. After seeing to the removal of the woman for surgical treatment, he apprehended her husband on the charge of having thrown her out of an upstairs window. This charge, on the death of his wife a few days later, was altered to one of manslaughter, on which Beardsmore was, in due time, put upon his trial before Mr. Baron Martin. It was conclusively proved that both husband and wife were dissipated characters; it was also shown that on this fatal night they had had a serious quarrel; and, accordingly, Beardsmore got off with a sentence of six months’ hard labour. This is the only tragedy associated with the name of Neville Street a name which was given to it in remembrance of the Earls of Westmoreland, who had their town house on the site of the Literary and Philosophical Institution. The thoroughfare was opened so recently as the year 1835, being then formed to advance the interests of the new Cattle Market, of which we must now say something. We pass on the way to the Cattle Market St. Mary’s Roman Catholic Cathedral, which is adorned with a lovely spire, designed, by Messrs. Dunn and Hanson, though the main building was designed by the celebrated Pugin.

There are veterans amongst us who can remember the time when Newcastle butchers had to travel to Morpeth on its market day to make their bargains. This arrangement no doubt suited the graziers and farmers of the district of which Morpeth is the centre well enough, but it was found an irksome one by their Newcastle customers. There was the coach fare to pay. There was the man or boy sometimes both to think about. These had to make the journey on foot the night before, and usually broke their fourteen miles’ walk at some convenient spot on the roadside, where they slept in the open air. Moreover, the road was not a particularly safe one. For these reasons a beginning was made, in a small way, with a cattle market at Newcastle about the year 1830 or 1831. For a long time the ground between the Infirmary and Marlborough Crescent proved sufficient for all the purposes of the market. Then new pens were erected for large cattle to the westward of the Infirmary.

The Infirmary was in the first instance the result of a kindly thought on the part of some members of a convivial society which was about to break up in 1751, who desired to leave behind them a charitable memento’ of their merry meetings for the benefit of posterity. Amongst them was Joseph Airey, George Headlam, Ralph Headlam, Richard Burdus, and Richard Lambert, a young surgeon. The latter is supposed to have been the author of a letter inserted in the Newcastle papers in advocacy of the project, signed B. K. In remembrance of this letter, one of the wards of the Infirmary is still called B. K. A house in Gallowgate was secured, to begin with, as a temporary hospital. Soon another house was needed, and secured. Subscriptions for a permanent building flowed in freely, amongst them being a shilling found in the poor’s box, wrapped up in a paper containing these lines:

To serve the needy, sick, and lame,
This splendid shilling freely came,
From one who knows the want of wealth,
And, what is more, the want of health.
Beneath this roof may thousands find
The greatest blessing of mankind;
And hence may millions learn to know
That to do good’s our end below;
That vice and folly must decay
Ere we can reach eternal day.

The famous Joseph Butler, Bishop of Durham, laid the foundation stone of the present structure in September, 1751, and it was ready for patients thirteen months later. An addition was made to it in 1801-2. The hundredth anniversary was celebrated in 1851, when a further enlargement was made. Since that time still other additions have been carried out.

Some eminent physicians have been connected with the Infirmary at various times, as, for instance, John Clark, “the greatest benefactor of the afflicted poor that ever appeared in Newcastle.”; Adam Askew, ancestor of the Askews of Pallinsburn; John Rotherham, author of “A Philosophical Essay on Water”; and Edward Kentish, a clever man with some odd opinions, as when he argued that the French Revolution was “a moral and political epidemic,” to be cured by “a cooling regimen and free ventilation.” The institution has had some remarkable patients too, but we have only space for one, to wit, “Radical Jack,” who died here in 1848, at the age of 54. His real name was John Dennis, and he gained his living by hawking cheap periodicals, though he was said to have received an excellent University education. He was certainly a man of ready wit and great command of language, but ah, that fatal but! “for years he was hardly ever sober.”

We have not forgotten that in going from Neville Street to the Cattle Market we have passed the site where once stood the celebrated Forth House. But the ancient Forth, completely transformed in its character and surroundings within living memory, has been described in a previous volume (coming soon! to Northeastlore).

Scotswood Road, which begins beyond the Cattle Market, was only commenced in the summer of 1834. It has been growing ever since, and is now a long thoroughfare of shops and public-houses. The streets which run off from Scotswood Road are, in their names, suggestive of the rural character of this neighbourhood up to a recent time. Amongst them we have, for instance, Pine, Laurel, Sycamore, and Maple Streets. As we progress onwards, we come to the famous Elswick Ordnance Works of the great firm of Sir William Armstrong, Mitchell, and Co., which are amongst the industrial glories of their time, and give employment to thousands of artizans in their various departments.

In August, 1846, a thunderstorm did considerable damage in Scotswood. A row of houses called Greenhow’s Terrace, fell to the ground, and fifteen persons were also struck down. Some of these were dreadfully scorched, but they all eventually recovered.

In the next year, in the month of April, a young man made his appearance at the house known as the Ord Arms, Scotswood, then kept by one John Cox. He took lodgings here, stating that he had come to Newcastle to be trained by Harry Clasper for a skiff race to be rowed shortly at Manchester. The young man’s name was John Bourne, and he was respectably connected. To a Scotswood publican of that day, the thought of having for lodger an oarsman training under the redoubtable Harry was a pretty considerable bait. Cox swallowed it; and at night lodged the new comer in his own bedroom. Behold! in the morning the lodger had vanished, and with him £200 had gone also, as a chest of drawers broken open too surely testified. The thief, captured at Normanton railway station with all the money upon him, was transported for ten years.

Scotswood Road has its tragedy, young as it is. On October 22nd, 1854, the bodies of two young women, decently dressed, were found drowned in the Tyne. They turned out to be those of Ellen and Isabella Robinson, fifteen and thirteen years old respectively, daughters of Ezekiel Robinson, who lived in Duke Street. How came they in the river? Well, there had been a slight family quarrel, which induced Ellen to rush from the house at midnight. Isabella followed her. Ellen, who was of a very passionate temper, jumped into the water. Isabella followed, hoping to save her, and both were drowned.