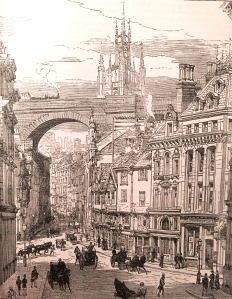 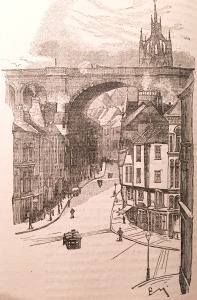 Our illustrations of the Side, or rather the reminiscences they are calculated to awaken, carry us back to a period in the history of Newcastle when the commerce of the town had for its arena not the Tyne itself, but the Lort Burn, a stream which, according to Grey’s “Chorographia,” was navigable to the very doors of the Cloth Market, in the line of Dean Street and Grey Street, as far as the High Bridge. “In after times,” Grey adds, “the merchants removed lower down towards the river, to the street called the Side and the Sandhill, where the trade remaineth to this day.” This was penned in the seventeenth century, and a hundred years later, we learn from Bourne, the Side was “from one end to the other filled with shops of merchants, goldsmiths, milliners, upholsterers, &c.” Still another hundred years passed away, and we find Mackenzie, in 1827, speaking of the ascent being very steep; and “this, added to its extreme narrowness, and the dingy houses on each side, projecting in terrific progression, rendered the passage inconceivably gloomy and dangerous. Yet, before the erection of Dean Street, it formed the principal communication with the higher parts of the town.” At this date, we read, it was mostly inhabited by cheesemongers.

Hearing in mind the fact that the Lort Burn flowed down by the High Bridge, the Low Bridge, and the Sandhill, the origin of such names as Dean Street is easily explained. But the name of the Side, unless it be the side or steep bank of a river, has long been a source of perplexity.

There is a traditionary story of a stranger who, receiving a Newcastle letter dated “Head of the Side,” took it to be a slip of the pen, and wrote back: to the “Side of the Head” the Saracen’s or some other Head, as he imagined.

The Side as we know it is vastly altered; indeed, our view, one of which is taken from the entrance to Queen Street, looking towards the Old Grapes Hotel, represent a scene which is undergoing a constant process of change. Dean Street, spanned at the foot by the imposing Railway Arch, has invaded it, and year by year old buildings give place to new; yet some of the projecting houses and gabled roofs still survive to awaken recollections of the time when the; principal traffic of the town passed this way, over the Old Tyne Bridge, and up the steep scent. Here, too, were witnessed State progresses between the English and Scottish capitals. The two illustrations which we give are substantially the same, the only difference being that the one represented with little or no traffic is taken from a higher elevation at Queen Street. Perhaps, with the lantern tower of St. Nicholas’s in the background, it would be difficult to find, in less space, so many distinct architectural features, the peculiarity being that palatial buildings, worthy of the most noble thoroughfares, are here mingled with the picturesque remnants of long ago.

In proof of the interesting historic character of the scene, we may conclude with the following, culled from Grey’s “Chorographia,” that small quarto of a few precious pages printed in the year 1649:

“In the lower part of the street called the Side standeth a faire crosse, with columnes of stone hewn, [the roof] covered with lead, where is sold milk, eggs, butter. In the Side is shops for merchants, drapers, and other traders. In the middle of the Side is an ancient stone house, an appendix to the Castle, which in former times belonged to the Lord Lumleys before the Castle was built, or at least coetany with the Castle.”