Mr. WILSON HEPPLE showed at the late Bewick Club Exhibition in Newcastle a large oil painting, in which he undertook to represent on canvas one of the most romantic incidents connected with the history of Newcastle the elopement of John Scott and Bessie Surtees.

Full details of the affair are recorded in the Monthly Chronicle for June, 1888; but it may be briefly explained that Bessie Surtees was the daughter of Aubone Surtees, banker, Sandhill, Newcastle, and that John Scott was the son of William Scott, a respectable merchant and coalfitter, also of Newcastle. The young pair had become acquainted at Sedgefield, and the acquaintance ripened into friendship and love. Thus we arrive at that stage when the fair heroine, “in a moment of terrible indiscretion,” as one of the historians of Newcastle puts it, consented to leave her father’s house and join her fortunes with those of the merchant’s son. For a while the young couple had a hard struggle; but John Scott in no long time carved out his own fortunes. At first he studied for the Church, but his marriage debarred him from taking holy orders: so he turned his attention to the law. After distinguishing himself in several minor cases, he became in succession a King’s Counsel, a member of Parliament, Solicitor General, Attorney-General, Lord Chief Justice of Common Pleas, Baron Eldon, Lord High Chancellor, and Earl of Eldon. 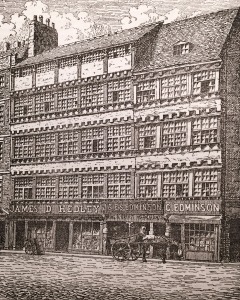 Mr. Hepple has painted many North-Country subjects, but it may be doubted whether he has ever produced a work of so much interest as that which is engraved on the next page. The old-fashioned houses loom up in mysterious bulk; the moonlight effect is rendered with rare charm; and the general conception is excellent. In the foreground we have the lovers hurrying to the coach which is to carry them on their midnight journey. The ladder placed against the casement is sufficiently eloquent of its purpose. Scott’s willing helper, Wilkinson, the apprentice of Snow Clayton, a tradesman who occupied the premises below those of Surtees, is seen in an excited attitude, and evidently warning the lovers that caution is necessary. But even without the figures, the picture would have been a great achievement as a Newcastle street scene by night.

The artist claims that his picture is historically correct. He has studied many old woodcuts and engravings of houses that have been removed, and has consulted all the local records, including the Monthly Chronicle. Indeed, it was while reading the account of the famous elopement in this magazine that the idea struck him that it might be possible to realise it by the aid of the brush.