STANDING on the terrace in front of the Winter Garden, Sunderland, the spectator will note that one of the most striking buildings in sight is the Victoria Hall. It was here that the sad and never-to-be-forgotten calamity occurred on the 16th of June, 1883, when no fewer than 183 unfortunate children lost their lives.

A public performer named Fay had issued notices in the early part of the week to the effect that he would give a grand juvenile entertainment at the hall on the Saturday afternoon; and, as a means of securing a good attendance, he circulated tickets admitting children at the reduced price of one penny each to the gallery. He likewise announced that prizes, in the shape of books, playthings, etc., would be distributed at the close of the performance. The entertainment commenced at three o’clock, when there were about eight hundred children in the body of the hall, eleven hundred in the gallery, and a few in the dress circle, which was otherwise empty. There were scarcely any adults present besides Mr. Fay and his assistants, only a few nursemaids accompanying such of the children as had paid the full price of admission and got accommodated in the better parts of the house.  All went on well until the close of the proceedings, when the entertainers began to distribute prizes to the children downstairs. But as soon as those who were crowded together in the gallery, without any grown-up person to keep them in order, saw that the presents were being scattered about down below, they naturally became excited, and began to fear that none would be left for them. In an instant a number of the children rose to their feet, and made their way to the folding doors leading to the staircase, their intention being to run down into the body of the hall and share in the distribution of the toys.

About three parts of the way down the winding staircase was a door which opened inwards. This door had for some unexplained reason, or perhaps quite accidentally, been fastened partly open by a bolt in the floor, leaving for egress a width of about two feet only barely sufficient for one person to pass at a time. The foremost of the eager youngsters dashed impetuously through the folding doors, and swept in a living torrent down the first two flights of stairs. So long as the way was lighted and clear they passed on safely enough, until, streaming down from, landing to landing, and passing the doors and windows of the dress circle into the corridor, they approached the doorway above mentioned. The winding stair prevented those who were rushing down, with all the eagerness of children in a hurry to participate in the fun, from seeing what was actually happening in their immediate front. Those who were in advance were pushed forwards to the door by the crowd behind them, without the possibility of resisting the pressure. The narrow exit between the half open door and the door-frame was speedily choked up, one spectator averring that he saw nearly twenty of the poor little creatures one above another struggling to get out; and as the rush was still coming incessantly down like an avalanche from a mountain side, the children in front had not the least chance of escape. Some fell against the door; others were forced upon them by the pressure behind; and the lower part of the staircase was filled in an instant of time with a heap of helpless children whom it was physically impossible to rescue or relieve. Those who were still rushing down the stairs in tumultuous haste, cheering as they came on, and struggling who should be foremost, had no idea of what was going on below. So, quicker than one can tell, a dense pile of bodies was crushed in the fatal trap, between the door and the wall, such being the amount of pressure to which the frames of the hapless little ones were subjected that the strong wrought-iron bolt, whose presence did the mischief, was bent by the force of the compact of the shrieking and struggling mass of humanity, literally heaped up in tiers.

It was evident that before the life was crushed out of them they struggled desperately; for when the death-bolt was at length raised, after the bodies of the dead and the dying had been extricated, and the living had been hurried away from the appalling scene, the landing and the flight of stairs leading down to it were seen to be covered with pitiful evidences of the tragedy. Little caps and bonnets, torn and trampled, were lying all over the place ; buttons and fragments of clothing littered the floor ; here lay the fragment of blue ribbon which had tied up some little girl’s hair; there lay a child’s garter ; on another spot the sole of a little boy’s boot torn from the “uppers,” furnishing mute but significant evidence of the violence of the death struggle.

The caretaker of the hall, Mr. Frederick Graham, was the first who became aware that something dreadful had happened. When he got to the lobby, at the foot of the gallery stairs, he found a number of children lying there. After he had got them cleared out with no small difficulty, he proceeded from the outside towards the fatal door, being attracted thither by the groans and cries of such of the sufferers as were still alive. Mr. Graham at once perceived that the bolt had caught in such a way that the door could neither be opened nor shut entirely, and through the aperture, about two feet wide, thus formed, he caught sight of a writhing mass of human forms. He made one frenzied but futile effort to force back the door, and then rushed upstairs by another way into the dress circle, from which position by strenuous efforts he succeeded in stopping the further flow of children to the staircase. He then hurried back to the door, when he saw at once that the only means of rescue was to pull the bodies one by one through the aperture. With the assistance of a gentleman named Raine, a railway clerk named Thompson, and a police constable named Bewick, he commenced the ghastly task. Further help fortunately soon arrived in the person of Dr. Waterston and others. As soon as a body was pulled out, it was rapidly examined, and, if dead, laid out in the area or dress circle; while if the little sufferer still lived (and the signs of vitality were often very difficult to detect), the child was at once conveyed to the Palatine Hotel, the Infirmary, or some other house in the neighbourhood, where Drs. Beattie, Dixon, Murphy, Welford, Lambert, Harris, and other medical men, who were promptly on the spot, devoted themselves ungrudgingly to the work of mercy. The conduct of the cabmen of the town was also beyond all praise. They flocked to the hall with their vehicles, and rendered valuable help in conveying the injured to the Infirmary and elsewhere.

Meanwhile, the dreadful news had spread like wild fire through the town, and the hall was soon besieged by thousands. The excitement was indescribable mothers screaming for their children, and fathers fiercely striving to force their way into the building. It was, however, deemed prudent not to admit anyone until the work of rescue had been completed; but the gentlemen, all of them full of sympathy and compassion, who volunteered to assist in the necessary but thankless work of keeping back the excited crowds, found it a most difficult task. When, at length, those claiming to be the parents of missing children were admitted in batches to the area and dress circle, the scene inside baffled all description. The children were laid out in rows, terrible to behold, many with blackened faces, swollen cheeks, and parched lips. As parents identified their children, their shrieks were most distressing. In some cases they fell upon their dead children, clasped them in their arms, and cried aloud over their dear ones. In many instances the mothers swooned away, and had to be carried to one side, where others, whose children had escaped, sought to restore and console them. One affecting case was that of a poor woman whom Mr. Errington, a member of the Town Council, was sympathetically assisting in her search. As she accidentally touched a corpse with her dress, a man said to her, perhaps somewhat roughly, “Don’t stand upon them,” when she replied, “Good God ! I have too many of my own to stand upon them.” The unfortunate woman, a few minutes afterwards, discovered three of her own children amongst the dead! Another instance is related of a man who, with his wife, pushed his way into the hall, and eagerly scanned the faces of the dead. Without betraying any emotion, he said, with his finger pointed and with face blanched, “That’s one”. Passing on a few yards further between the rows of little ones, he said, still pointing with his finger, “That’s another.” Then, continuing his walk till he came to the last child in the row, he exclaimed, as he recognised the third little one, ” My God! all my family gone.”

Among the many distressing features in connection with the affair, that of mistaken identity was not the least agonising. A number of children taken away in the excitement of the moment were afterwards returned to the hall, the poor people having been misled as to the identity of the shapeless little masses of humanity. In one case, a parent took home a little boy by mistake, and after arriving there found it was the body of a neighbour’s child. Meantime, his own boy had been recovered alive, and was treated with all skill and care possible, though the little fellow died subsequently from his injuries.

The victims of the disaster comprised 69 girls and 114 boys. It was found by analysis that the greatest number were between the ages of 7 and 8 years. The following shows the numbers and ages:

In some families the whole of the children were swept away, and there are known cases where the brokenhearted parents have gone to their last home, never having recovered from the shock.

The disaster was the subject of talk and comment in every household in the land for more than the proverbial nine days; and for many and many a year to come it will remain in the memories of fathers and mothers as the most lamentable event in their lives. But it evoked, too, a spontaneous and noble outburst of humane sentiment, as is always the case when the heart of the community is touched. Money poured in from all sides, and a sum was subscribed for which there was no immediate direct need, as no bread-winners had been lost. Out of the amount promised, nearly 5,000 was received, and with this the expenses of most of the funerals were paid; but unfortunate dissensions hindered the remainder from being put to use for building and endowing a Convalescent Home for Children, as at first intended; and, with the exception of the sum paid for the statue in commemoration of the event, which has now found a resting place in the People’s Park, it still remains unappropriated.

The view of the exterior of Victoria Hall is taken from a photograph by Mr. Paul Stabler, of Sunderland; that of the interior is from a sketch by our own artist. The sketch of the staircase where the disaster occurred is from a drawing by Mr. Robert Jobling. Our other sketches show the Laura Street entrance to the hall, and the fatal door with the bolt in the socket. We also give sketches of the memorial group, and of the group in its glass case, erected in Sunderland Park. 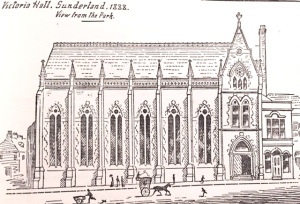 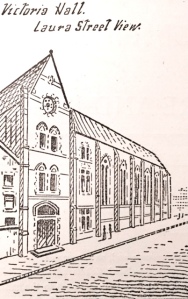 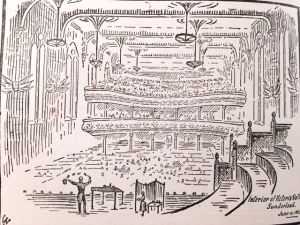 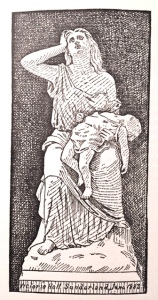