The following is a description of Pandon Dene, published in the Monthly Chronicle of North Country Lore & Legend in February 1890.  In Medieval times, Newcastle was divided by several streams or burns flowing towards the River Tyne. Several of the roads have the term bridge in their names although no water is visible today. Examples are Barras Bridge, New Bridge Street, High Bridge and Low Bridge. They were often important sites for industry and settlement but hampered communications and development. As the town expanded they were filled in and now flow in culverts buried deep below the surface. 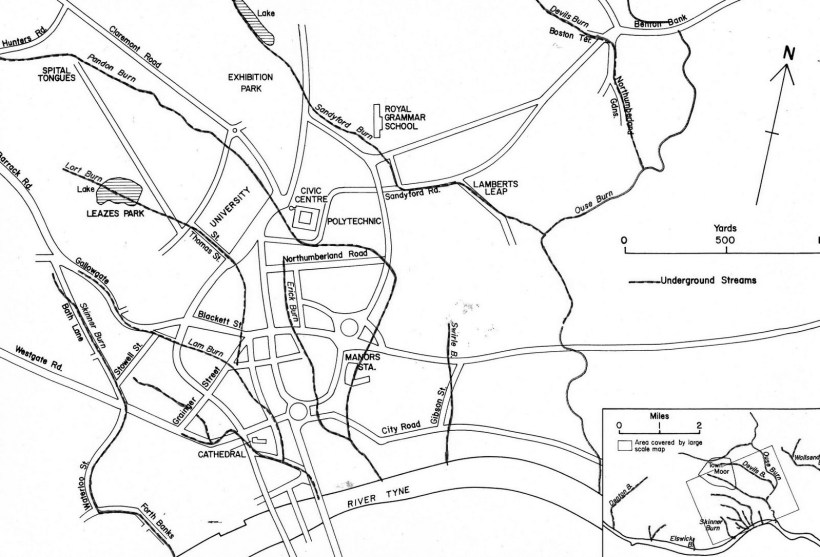 To write of Pandon Dene is like writing of some departed friend. There is a tender melancholy associated with the place like that associated with the memory of the dead. And when we think of it as it once was gay with foliage and blossom and look upon its condition of today, buried far beneath a mass of ever accumulating rubbish, our melancholy is not unmingled with regret that so splendid a site for a public park should have been lost the city.

One of the old features of Newcastle, in which it differed from the flat monotony of many towns, was the number of its little valleys, each with its streamlet flowing down the midst, which graced it with so pleasing a variety of hill and dale, and added to the picturesqueness of its situation on the bold sloping banks of the Tyne. Of these little valleys one of the most lovely was that whose blotting out we now deplore. Through it flowed the Pandon or Bailey Burn rising near Chimney Mills, running between the Leazes and the Moor down to Barras Bridge then, after receiving its little tributary, Magdalene Burn, about opposite the end of Vine Lane, merrily turning the wheels of the various water mills which nestled down by its side amongst gardens and trees, until it flowed under the Stock Bridge and Burn Bank, and so joined old Father Tyne.

It would take a very big book to contain the history of this little valley and its associations, and its historian might linger long and lovingly over many a spot within its watershed, of deepest interest to lovers of old Newcastle lore. He would have much to say of its two bridges now bridges only in name: of the Barras Bridge and of the contiguous hospitals of St. James and Mary Magdalene of the New Bridge and its building. We show in one of our illustrations a view of the former bridge when it was in reality a bridge. The picture is from a drawing made by the elder T. M. Richardson about 1810; and, rude as it is, a sufficiently good idea of the former beauty of the spot may be gathered from it. Two of our views show the other, the New Bridge, gracefully spanning the Pandon valley. One is from the north, taken from near the foot of the steps which used to lead down from Shieldfield at the end of the lane called “the Garden Tops.” It was painted by John Lumsden in 1821, and shows the old water corn mill, afterwards the Pear Tree Inn, the town in the middle distance, and the Windmill Hills at Gateshead beyond. The other (from a painting by James Dewar about 1833) is from the south, from near what was afterwards “New Pandon,” and gives us a view of the well-known Mustard Mill in the foreground. The roof of Picton House (now the Blyth and Tyne Railway Station) is seen, on the left, peeping over the parapet of the bridge. 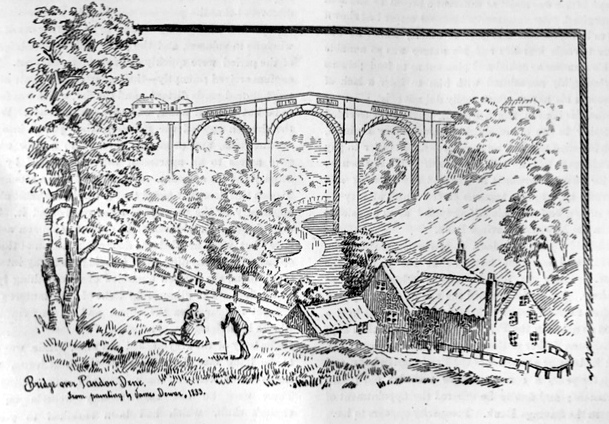 The account of the mills of Pandon Dene would of itself form a goodly chapter in our imaginary historian’s book, and would carry the reader far back into the mists of antiquity; for the waters of the burn have turned mill wheels from time immemorial. As far back as 1460 we have recorded the proposed erection of one of these mills. On July 10th of the year named we find the Mayor and community of Newcastle devising to John Ward (formerly Mayor of the town, and founder of the Charity in Manor Chare known afterwards as Ward’s Almshouses), along with other lands, “a certain other parcel of waste land, of the trenches called the King’s Dykes outside the (Town) Wall, and land within the wall to the extent of forty-two ells in length, from the aforesaid gate (Pandon Gate) and along the wall, and in width the same as the King’s Dykes, to hold, etc., for the building and construction upon the said parcel of land, outside the wall, a dam for the mill, &c.” (Welford’s “Newcastle and Gateshead.”).

With this part of Pandon Dene is associated the memory of one of the old worthies of Newcastle, the opulent and munificent Roger Thornton, whose memorial brass is still extant and to be seen in All Saints’ Church. After his death in 1430, an inquisition was held to take account of his property, and in the record the name of Pandon frequently occurs in connection with gardens and orchards possessed by him in the vicinity of the Stock Bridge. 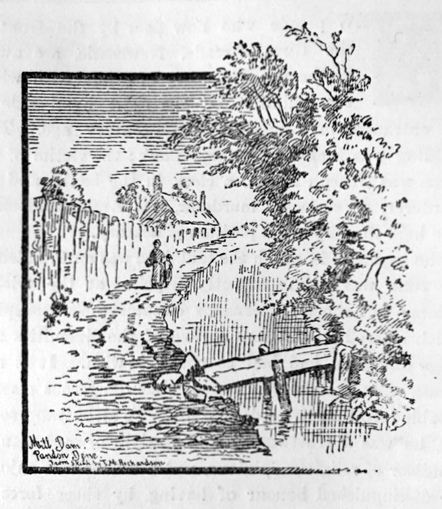 In our own times, besides the two mills already mentioned, there was the Oatmeal Mill, higher up the valley on the left bank of the burn. It is seen in Mr. Jobling’s view on this page, which shows some of the old gardens in front of Lovaine Crescent, with the little houses in which many of the occupants lived, the mill house in the middle distance, and St. Thomas’s Church behind. Close by the mill was the cottage of Julia St. George, the famous actress, whose career is sketched elsewhere. We give also another very interesting view, showing Julia St. George’s house in the distance, with the footpath leading down by the burn side from near the end of Vine Lane. It is from a pencil drawing made by Mr. Ralph Hedley, after T. M. Richardson, and gives some idea of the old-time rural beauty of the Dene.

Some further idea of the charms of Pandon Dene may be gathered from the following verses which they inspired, and which appeared over the signature of Rosalinda in the Newcastle Magazine, Sept. 18th, 1776:

Then off to Pandon Dene I stray;

When sore depressed with grief and woe,

Then from a busy world I go;

My mind is calm, my soul serene,

Beneath the bank in Pandon Dene.

The feather’d race around me sing,

They make the hills and valleys ring;

My sorrow flies, my grief is gone,

I warble with the tuneful throng:

All, all things wear a pleasing mien

At distance stands an ancient tower,

Which ruin threatens every hour;

I’m struck with reverence at the sight,

I pause and gaze in fond delight.

The antique walls do join the scene

Above me stand the towering trees,

While here I feel the gentle breeze;

The water flows by chance around,

And green enamels all the ground,

Which gives new splendour to the scene

And adds a grace to Pandon Dene.

And when I mount the rising hill,

And then survey the purling rill,

My eye’s delighted; but I mourn

To think of winter’s quick return,

With withering winds and frost so keen,

I, sighing, leave the Pandon Dene.

If you your talents thus bestow;

Scare fifteen summers have I seen,

Yet dare to sing of Pandon Dene.

Alas, poor Rosalinda! both you and the carping critics of your generation, whose wrath you so modestly deprecate, and whose “conscious cheek” you so tenderly seek to spare, are now laid low in the dust. Not you only, but even the sweet scenes which inspired your muse. Henceforth, all thoughts and memories of Pandon Dene shall be but as echoes from the depths of a buried past, gradually, on each repetition, growing fainter and more faint, until they die away into the utter silence of forgetfulness.